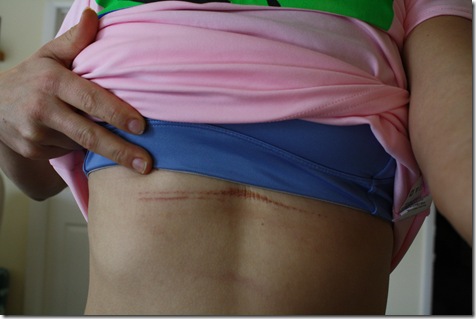 Do you have these war wounds from your running?

“NO CHAFING OR RUBBING!”  That is a line on our Cheata posters we hang up when we are at marathon expos. And as you probably imagine we are very popular at the expos because right above the “no chafing” line on the poster, it  reads “the stability of 2-3 sports bras”. That line gets the most attention from full busted ladies because of the bouncing epidemic in the running world.

However, here’s the dilemma  we have with our poster – some women who are not  busty stop reading the poster  after they read the “2-3 sports bra line” and never see the “no chaffing or rubbing line”.  They don’t need the stability of  2-3 sports bras so they don’t need Cheata, right? So why keep reading?

But these women are getting sawed in half when they run. And copious amount of Body Glide helps but is no magic bullet.  How would a sports bra made for equestrians and law enforcement going to help them? Companies like Moving Comfort who specialize in serious running would certainly be the ones with the answer. Well, apparently not.

In short, this is the major culprit of your underboob chafing – the under band on your sports bra is too high on the torso. We say its too high , but it is the predominant length featured on sports bra sold in running specialty stores. And for a runner who is prone to chafing, that high under band is a guarantee it will continue or worsen.

When the under band lands right at the breast fold, the bra does not have enough leverage to stay put on the torso and it creates micro shifting in the garment from the rhythmic momentum of the runner’s stride. That micro shifting rub is what is creating the chafing. The micro shifting is also eroding your Body Glide inevitably leaving the skin directly exposed to the band.

The under band of the Cheata bra is several inches below the breast fold. The torso coverage of the garment advances super leverage so that is does not shift or micro shift. It hugs and contours the upper torso like a second skin; something that is part of you, not on top of you traveling around.  No travel, means no chafe.

We met Cozette an insanely avid runner (with the best figure we’ve ever seen in our lives!!) at the Run The Bluegrass Marathon in Lexington KY in April 2017. She’s not a busty girl but we saw here reading every line in our poster and then she looked up to us super skeptically and said “Does this bra really stop chafing? Because I’m not busty but  I’ve got a terrible problem with chafing”.

We got Cozette all fitted and she really liked how the bra felt and we explained to her why the unique fit and features of Cheata stop the chafing.  She politely listened but we could still tell that this poor lady was beyond cynical that anything was going to stop the chafing problem. Help maybe, but stop it? Very doubtful.

5 months later at the United States Air Force Marathon in Dayton, OH a gleeful Cozette appeared at our Cheata booth with a smile so big you could see ALL her perfect teeth. “OMG it works!!! No chafing!!!” So we made Cozette tell the world on video since we inadvertently had captured the perfect anti-chafing wear test testimonial. Here’s the video –

We had the same experience with Tonya Whitlock at the Flying Pig marathon expo in Cincinnati OH. Tonya is busty and she wore it the next day for the marathon! (That’s a big no-no she told us. No trying out new stuff on race day. Your supposed to stick with the old miserable bra). Tonya is unquestionably an alpha female and she does what she wants (God bless her!!!)

. She sent us a photo of her at the race finish with a quote and we proudly made a graphic of it!

So whether you are full busted or not so busty and chafing is a problem for you, look into the Cheata Trotter to solve that. If you see Cheata at your next race expo please come by for a fitting.  Don’t feel pressured to buy just because you had a fitting. We are there to introduce the product to you properly not to “sell” you.

Canting your holster out for large breasts?

They’re looking at the dog, not my boobs, right??